All Gilbert municipal buildings, aside from Gilbert Municipal Court, Gilbert Police Department’s main station and the Household Hazardous Waste Facility, are closed to the public until April 10th. For the latest updates and information on Gilbert’s response to COVID-19, also known as coronavirus, visit gilbertaz.gov/COVID19.

Gilbert is Proud to be a What Works City! 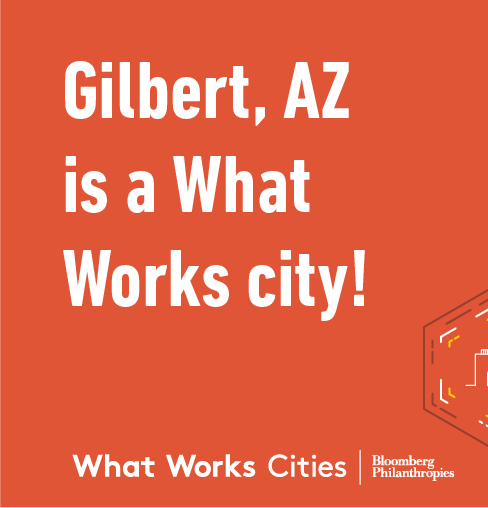 Mayor Jenn Daniels has announced that Gilbert, Arizona has been selected as one of 10 new cities to participate in Bloomberg Philanthropies’ What Works Cities (WWC) initiative – one of the largest-ever philanthropic efforts to enhance the use of data and evidence in the public sector. Gilbert will receive technical assistance from world-class experts to build capacity to address local issues. Gilbert will work towards strengthening resident engagement on infrastructure and economic development by developing a data inventory and a plan for prioritizing and releasing data both internally and to the public.

With 77 mid-sized U.S. cities now partnering with What Works Cities, the initiative is now three quarters of the way toward its goal of 100 cities, set at the program’s launch in April 2015. All together, these 77 cities come from 36 states, represent more than 25 million residents and have annual budgets exceeding $90 billion. The initiative will partner with 100 cities on a rolling basis through 2018.

"Gilbert is excited to be selected to participate in the What Works Cities initiative,” said Gilbert Mayor Jenn Daniels. “We are committed to making government more accessible and partnering with What Works Cities will further promote our dedication to open data and digital government and will improve our interactions with our residents.”

“We’re thrilled to welcome these new cities to our growing community,” said Simone Brody, Executive Director of What Works Cities. “They have affirmed their commitment to using data- and evidence-driven governance to deliver enhanced results for their residents, and we’re proud to partner with them as they continue working toward that goal.”

With support from a consortium of expert partners, What Works cities are identifying more effective ways to evaluate programs and improve performance; best use resources to serve their communities; and address a range of social challenges – from poverty and inequality to public safety. Another key benefit is joining What Works Cities’ growing national network of local leaders and global experts actively sharing best practices for outcomes-focused government.

Watch this video to learn more about the What Works Cities: 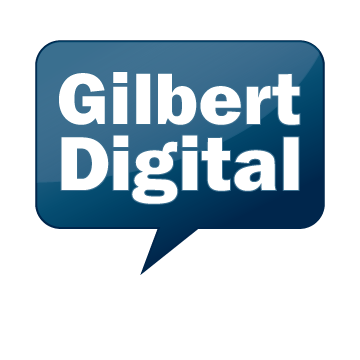 To support Gilbert's efforts to be leaders in technology, through the creation of the Office of Digital Government, we are leveraging digital tools and connecting with our residents like never before. By engaging out residents and visitors through sleek web design, mobile applications, and various forms of digital media, we are gaining local, state and national recognition.

Here are a few programs supporting our initiative to increase transparency, efficiency and innovation:

Gilbert is positioning itself to become a leader in digital government. By unlocking public records, we will enable technologists to build tools to help residents in their daily lives. This report outlines a path for Gilbert's success as a digital town by allowing for increased internet access, open government, citizen engagement and digital industry growth.

Gilbert is thrilled to announce the launch our new Open Data Portal and are taking it a step further by humanizing our portal with a character we’ve created named “Alex” who will help connect the dots on how to use our data on your own websites, applications, or research. Named after the Library of Alexandria, one of the largest and most significant libraries of the ancient world, Alex and Gilbert’s Open Data Portal are a place where visitors can find a wealth of information that can help residents and businesses improve their lives and operations.

Learn more and explore with Alex at alex.gilbertaz.gov.

“Government Gone Digital” is a new podcast series focused on the innovative ways that Gilbert, Arizona’s Office of Digital Government is interacting with residents and businesses to tell their own story through the use of social media, video and other digital methods.

Listen and learn more at www.gilbertaz.gov/govgonedigital.

SPARK App League is the first coding competition created specifically for junior high and high school students. Created by Gilbert, Arizona in 2012, this non-profit program is hosted in partnership with Arizona State University's Ira A. Fulton Schools of Engineering and is sponsored by Waymo, formerly called the Google self-driving car project. SPARK focuses on the thinking behind programming by helping students create a working video game while collaborating in teams.

Gilbert has more than 25 social media accounts, from public safety to our municipal court, to engage with the community. Gilbert's channels reach thousands of people and is a powerful way to form deeper relationships with constituents, gain valuable feedback and share information about services. Many of the the most effective social media initiatives provide a space for community-led discussions, with the Town playing an informative, supporting role in the background.

Follow all of Gilbert's social media accounts at www.gilbertaz.gov/connect.

Gilbert's Office of Digital Government, also known as Gilbert Digital,utilizes video to promote transparency in government by highlighting special events, topics of interest, and public meetings. Our most popular video is Gilbert's annual Digital State of the Town, a 15-minute, high-definition documentary-style film highlighting the years accomplishments. The Emmy-nominated Digital State of the Town allows people across Arizona and the entire country to view the production from home. In fact, it is seen by nearly 50,000 people a year.

Watch this year's Digital State of the Town and more videos from Gilbert Digital on our YouTube Channel at www.youtube.com/gilbertaz.