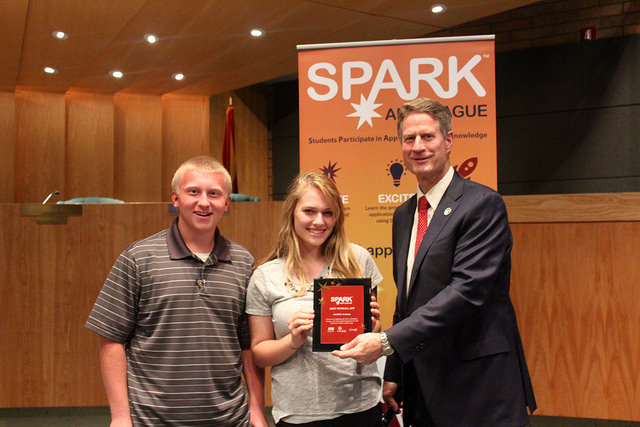 Gilbert, Ariz.- Gilbert will soon be getting a new tourism mobile app, thanks to high school students participating in the third annual SPARK App League. The competition is hosted by Gilbert, Arizona, in partnership with Arizona State University’s Ira A. Fulton Schools of Engineering and is sponsored by Google.

The competition kicked off in January, as teams of high school students from across the state were given eleven weeks to submit a mobile application using real data and design elements related to Gilbert tourism.  More than 250 students participated. Fifteen final submissions were judged on various elements including code and design.  Google software engineer and SPARK App League judge Jessie Chavez says the competition is one of a kind.

“I think this competition is awesome compared to others because we’re actually bringing such a wide array of students from many different schools and have a strong mentorship team from the university partner,” said Chavez. “It’s really nice that Gilbert has brought everybody together.”

The overall winner was a team from Foothills Academy College Prep. Team members Brendan Saliba, Devynn O’Donnell and Ryan Kundrata participated in the competition as part of their school’s tech club.

“I was not expecting to meet someone from Google so it really inspired me to do more competitions like this,” said Kundrata, “and hopefully work for Apple or Google or somewhere in Silicon Valley.”

As the competition continues to grow, teachers are incorporating it into their curriculums and after-school clubs. Larry Balog, tech club sponsor at Foothills Academy, says they will definitely participate again next year.

“I just can’t thank them enough because the students get the exposure and it’s a great experience,” he said.