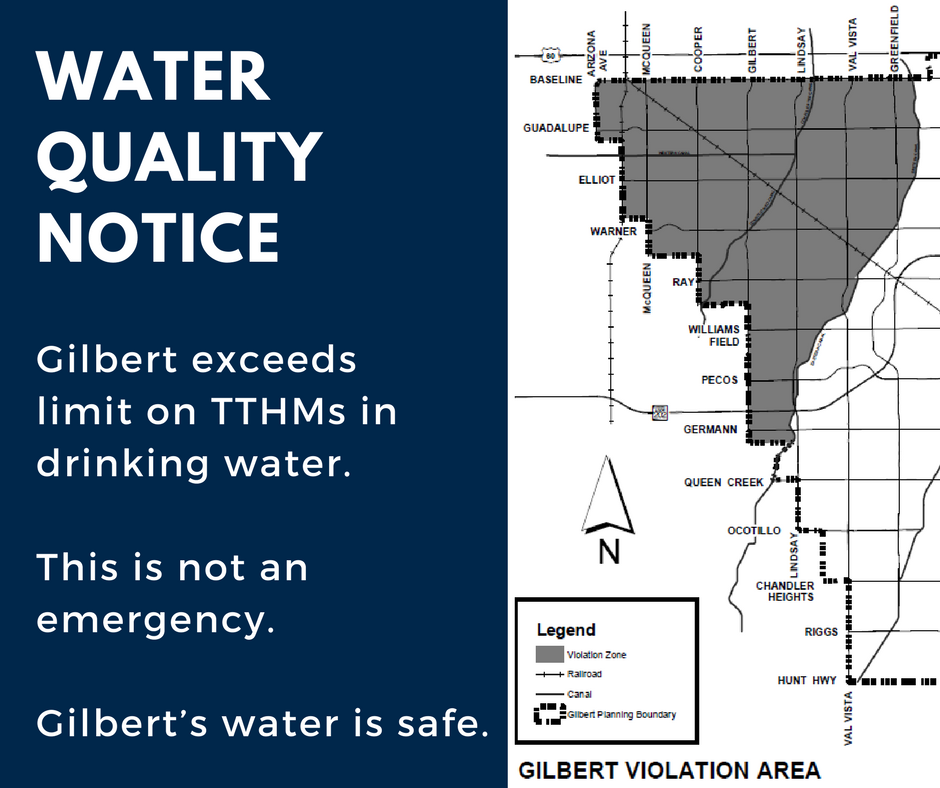 Some Gilbert water customers have received important information regarding Gilbert’s drinking water in the mail informing that Gilbert has exceeded the limit on Total Trihalomethanes (TTHMs). This is not an emergency and your water is safe to drink. If you haven’t seen the notice, view it here: http://bit.ly/waterqualitynotice.

Here are 5 things you need to know about this notice:

1. Your water is safe to drink.
Yes, we said this already, but it’s important. TTHMs pose an increased risk of cancer to individuals who consume water containing TTHMs above the maximum contaminant levels over their entire lifetime and to certain vulnerable populations.

2. What are TTHMs?
TTHMs, or total trihalomethanes are a group of four organic compounds formed in your water when naturally occurring organic material reacts with chlorine used for microbial disinfection.

3. This notice applies to “Zone 1” in Gilbert.
The area of Gilbert west of SRP’s eastern canal is isolated from the rest of the water system. In this zone, one of the six compliance locations exceeded the maximum contaminant level for TTHMs. View map: http://bit.ly/2vpWZkQ

4. The maximum contaminant level is based on a yearly average.
July's sample result, when averaged with the three other compliance samples taken over the past year, brought the average level of TTHMs above the 80 parts per billion (ppb) maximum contaminant level at one of Gilbert’s testing sites. Two of the past four quarter’s results remained below 80 parts per billion, and all other testing locations including, the other locations in Zone 1, remain below 80 ppb, as shown below.


5. How did this violation occur?
In October there was a mechanical failure of our TTHM removal equipment in a nearby water storage reservoir. This failure, and the resulting levels of TTHMs, did not in itself trigger a violation, but increased the average for that location. In April of 2017, the source water at the North Water Treatment Plant, which serves the area of Zone 1, experienced incoming levels of organic material over 25% higher than the seasonal average for previous years. These higher levels of organics have continued over the summer, and were present during our compliance sampling event in July. While the treatment plant was adjusted and optimized to remove more of the incoming organics, this resulted in higher TTHM levels in April and July which caused an exceedance of the running average at one of our sites.

This is a lot of information, but it’s important to know that your drinking water is safe. Should you have any questions, please contact Gilbert’s Water Quality Division at WaterQuality@gilbertaz.gov.